Mammoet Canada Eastern Ltd contracted JMS to provide engineering support for a complex launching operation of the ATB tug Freeport being constructed for US Shipping. The 12,000 HP tug is 150 feet long and weighed over 1,200 long tons. The tug had to be moved approx. 300 feet across the shipyard from where it was being built and transferred onto a floating barge.

JMS worked closely with Mammoet to develop a cradle design to be used with the heavy lift hydraulic transporters.

The transporters used for the operation presented unique challenges to the design of the cradle which is comprised of a series of eight saddles. The saddles are positioned along each side of the vessel with no transverse structure tying the system together. The saddles were positioned to support the tug via transverse bulkheads and deep frames.

With the structural plans for the newly fabricated tug, and the input provided by Mammoet regarding the anticipated loadout procedure, JMS developed a 3D model for each saddle to be located along the hull. The models were then imported into finite element analysis software. Loads were derived based upon the information regarding the loadout schedule, and a series of checks were performed. Further, only four of the saddles could be used for jacking points in the first and final phase of the loadout. This resulted in much higher load concentrations for the four saddles than the remaining eight saddles. The scantlings for four jacking saddles were necessarily adjusted to reflect the increased stresses associated with the jacking operation.

Most of the saddles were fabricated onsite, while several were fabricated offsite in order to expedite the aggressive schedule. JMS performed inspections during the fabrication. The individual saddles were fitted to the tug while JMS was simultaneously tasked by Mammoet to assess the existing site’s dry dock to the satisfaction of US Shipping’s insurance underwriter. JMS performed a detailed analysis of the dry dock in conjunction with the underwriter to determine if an alternate approach would be necessary.

The assessment determined that the dry dock structure would not be adequate for the loadout procedure. The concentrated loads imposed by jacking the tug from the transporter height to the blocking height would be too great for the existing structure. JMS explored options to strengthen the dry dock but the vessel owner’s time line necessitated an alternative approach.

Mammoet modified the loadout procedure to suit the available deck barge as well as having a bathymetry survey performed of the loadout site to ensure a safe operation. JMS developed a sea fastening arrangement to make use of the existing cradles in accordance with the underwriter and US Shipping’s requirements. The loadout was completed in early January 2007. JMS inspected the deck barge with tug loaded aboard, prior to its tow to the graving dock in Bayonne, NY. JMS determined the proposed sea fastening arrangement would be suitable for the coastwise transit. The barge with tug onboard was towed to NY where the operation was completed as designed. 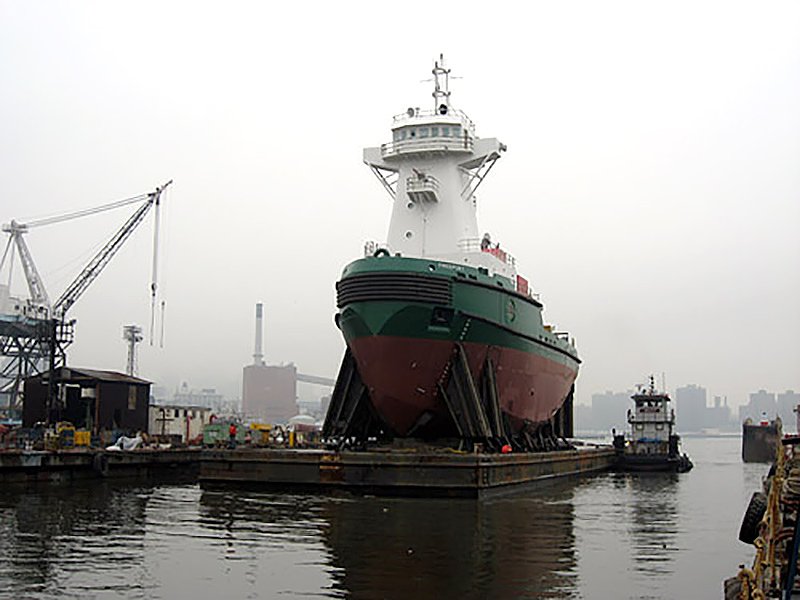