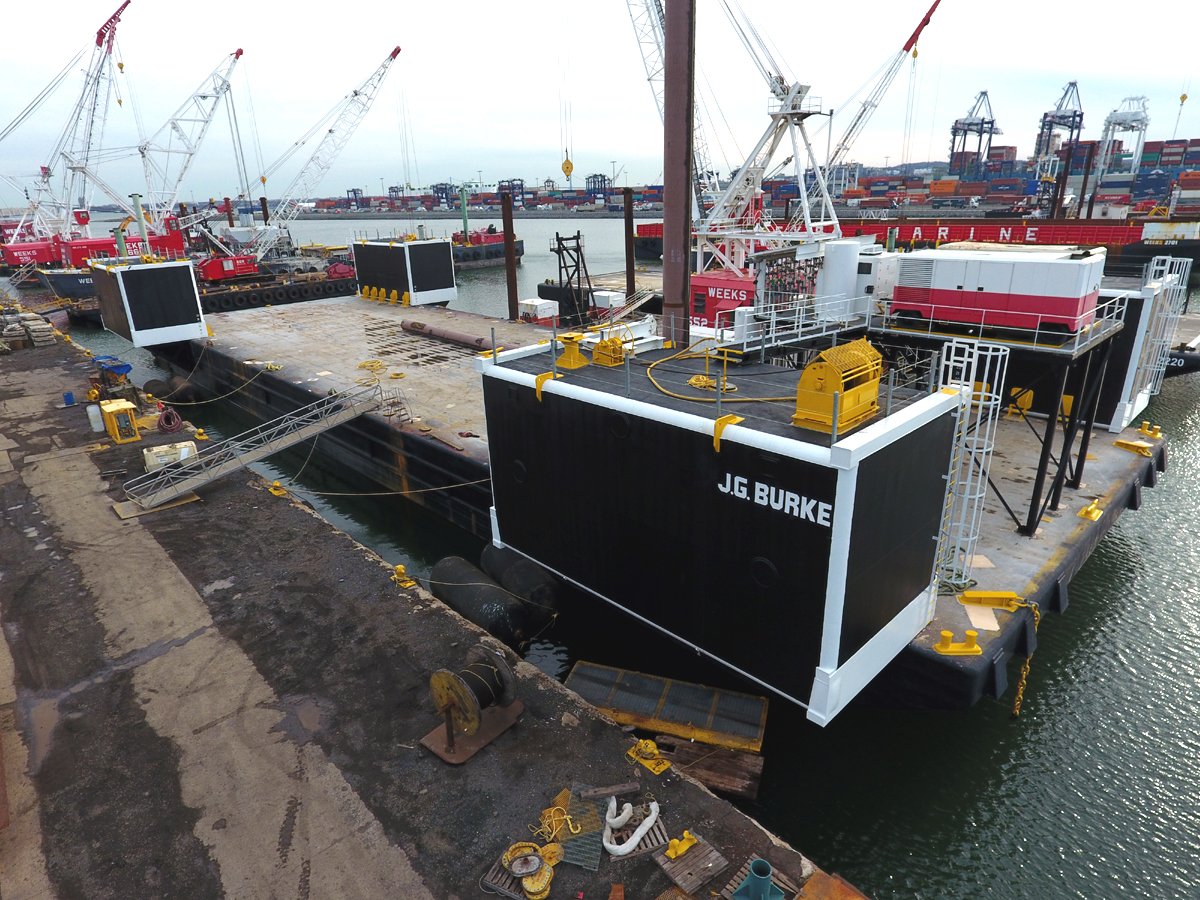 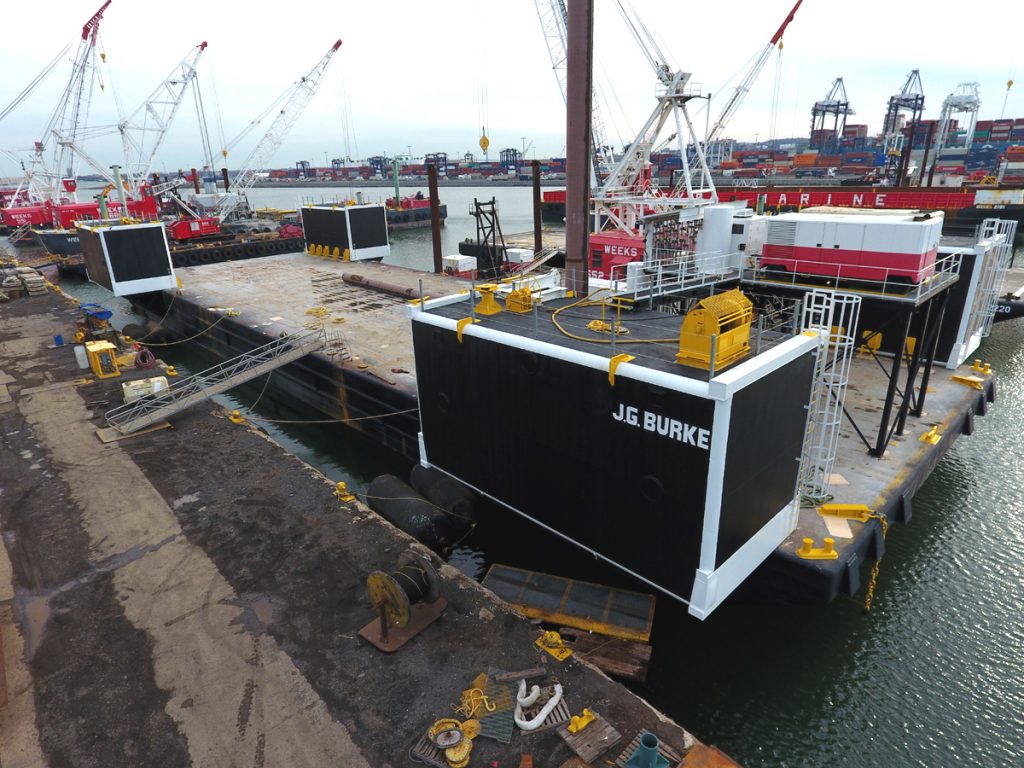 JMS developed a complete engineering and design package for McNally to modify an existing deck barge and allow it to be used as a submersible platform for constructing concrete caissons. JMS has also been providing engineering support throughout the modification of the platform.

Construction of an $80-million jetty in Halifax Harbour will ramp up into high gear in 2017 with the arrival of the large specialized barge. The JG BURKE will be in Halifax from March to August to assist with the construction of a new jetty for the Department of National Defense.

McNally will use the submergence platform to construct concrete caissons used for the construction of the jetty. The caissons will be formed on the platform by slipform method, at the installation site, one layer at a time, floated free, and then stacked onto a prepared rock mattress by filling them with rock ballast.

The new platform will replace McNally’s current submersible barge with a larger, more capable platform that is easier to operate. JMS engineered the platform to be mobile and highly flexible in order to accommodate a wider range of use including operating as a dry dock to refloat vessels for repair work. When used as a caisson construction platform for the construction of jetties and piers, a key design requirement was that the platform submerge with no trim or list for more controlled and stable operations. 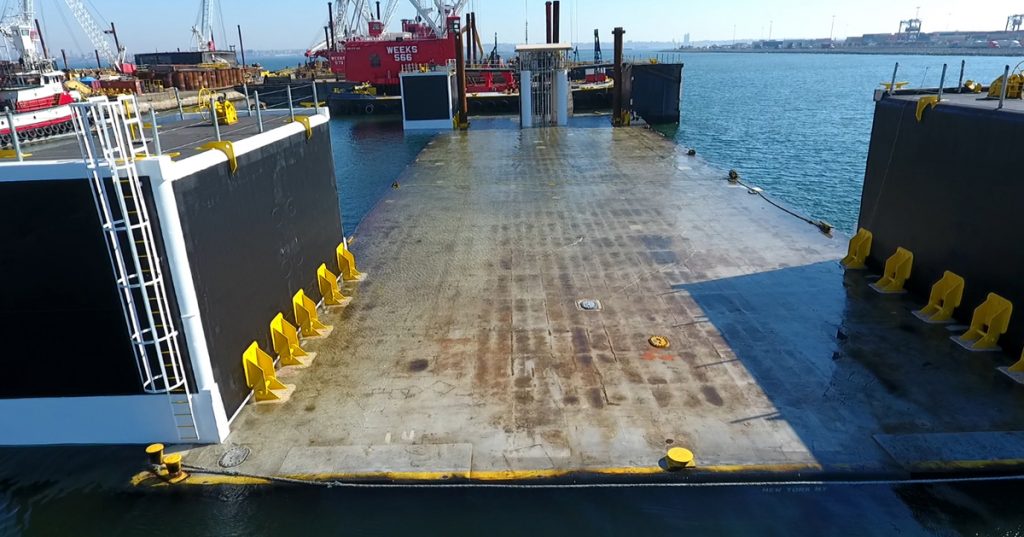 The new platform is based on an existing 250’ x 75’ x 16’ deck barge. Large external buoyancy tanks have been installed at each corner of the barge with supports engineered and designed by JMS to allow the tanks and supports to be removed when the vessel is not being operated as a submersible platform. The ability to remove the buoyancy tanks and supports and carry them on the platform deck allows the platform to be transported through the 78’ wide locks of the St. Laurence Seaway. Once the platform is at the construction site, the buoyancy tanks are reattached and a clear working deck of 150’ x 65’ is made available with clear access from three sides. The vessel also benefits from increased stability provided by the attached buoyancy tanks expanding the overall beam to 101’. 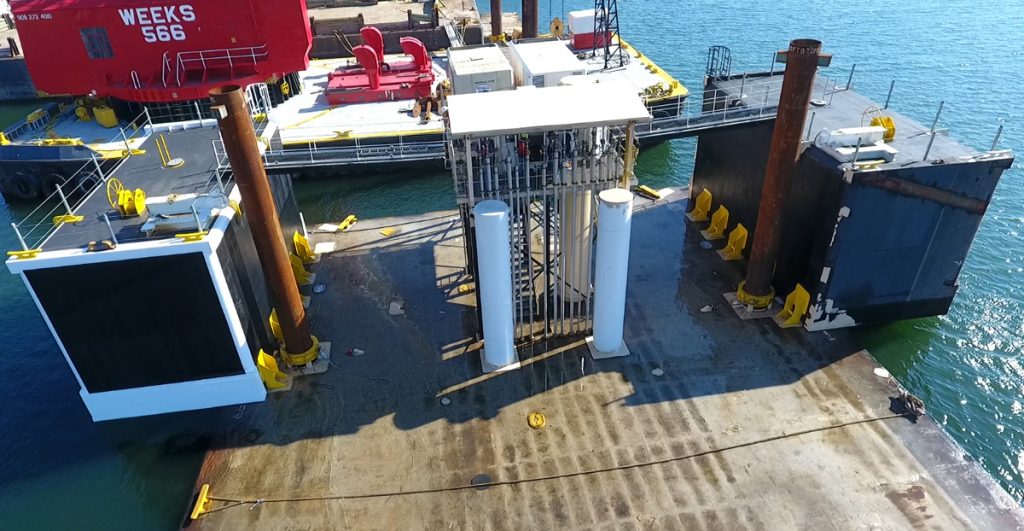 JMS also engineered and designed a ballast control air system supplied by two 750 cfm air compressors used to deballast the barge. The deballasting and submergence operations are controlled from a raised control platform installed at the bow of the barge. A manually operated air manifold is located on the control station platform and the ballast system is controlled remotely by air actuated valves. JMS engineered and designed the high-capacity ballast system to be capable of supporting the construction of concrete caissons weighing up to 5,000 tons and with a footprint of up to 150’ x 65’. The ballast system is capable of submerging and reballasting from a 12” freeboard to an 18’ depth over the deck in approximately 90 minutes each direction.

When used as a floating dry dock, the platform can accommodate vessels up to 2,000 tons and 180’ long. Weeks Marine engineered and designed spudwells, and a spud lifting system, located on each side of the bow and fitted with 80’ spuds to allow the barge to maintain position during caisson construction operations. 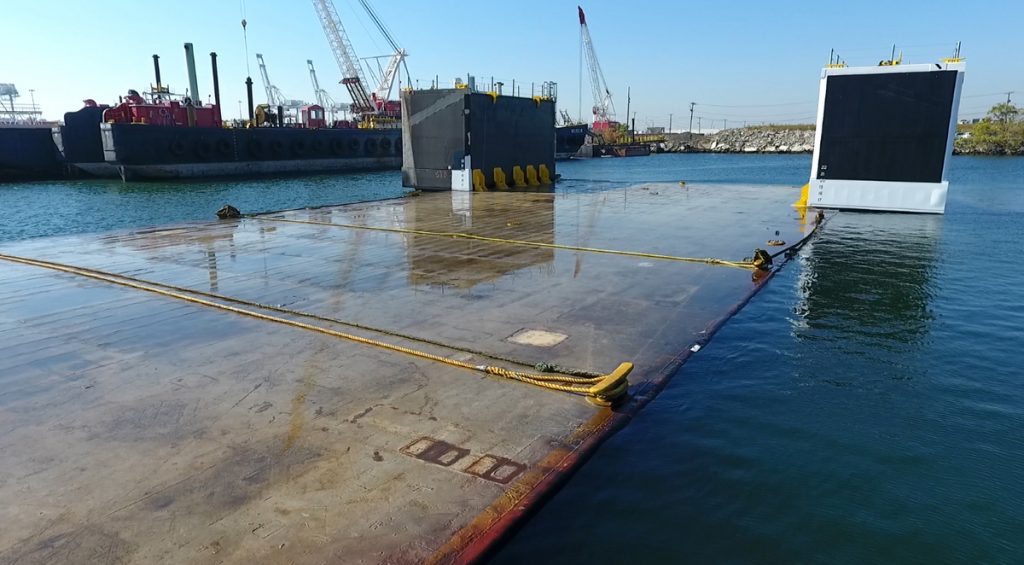 The new submergence platform retains the loadline of the original barge so it can be towed offshore to construction projects. All modification work was performed by Weeks Marine.